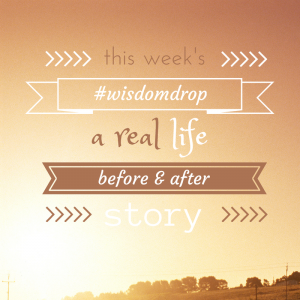 I have to tell you this story about a girl I’ve had the privilege of working with:

Once upon a time a girl inquired about life-coaching via my website. Let’s just call her “P’…

P was 19 years old & from the Bronx — from what she calls the ghetto.

After we had a phone consultation, we immediately began working together doing online life-coaching sessions.

When I was in NYC a few weeks after we started, we got to meet.

She showed up to the coffee shop in sweat pants and with a bandana covering her matted hair. She walked with her head down. She seemed uncomfortable in her body. To large for any room. Too full of shame. The hurtful verbal abuse from her mother and alcoholism of her father (not to mention the shame, guilt and pain from all sorts of other abuses that I won’t go into) covered her. She didn’t smile that day.

The only emotion she was able to show for the first several months I knew her was rage.

She wasn’t my typical client, but the same principals apply for everyone.

And she already sort of got it.

She told me once that she believed that if she could remove what was in the way of her feeling loved — the trauma, the stories and the fears of the past — she thought she could have a happy life.

I made it my job to show unconditional love, acceptance, safety, and understanding no matter what. She pushed and pushed and pushed me away. She told me she hated me… more than once. She told me I sucked and repeatedly told me how to do my job. (lol) I always understood that her comments weren’t about me, but about every person in her life that she couldn’t trust before me. I believed that she was valuable. I believed that she had a great, great destiny ahead.

I was often challenged, but knew our work together was important.

P and I did regular phone sessions for quite some time.

She made many changes and transitions and grew a ton in that time — and since.

She left the Bronx and that abusive home and moved far, far away.

She began to trust herself and her desires.

She began to believe she was worthy of a good and happy life.

She learned to set boundaries with people and walk away from unhealthy relationships.

She blows me away constantly.

I got to see P for the second time EVER this weekend.

When she got out of the car in front of my house… I saw someone very different than who I remember from before.

As she shouted, “FRANCES!” confidence radiated from her.

At first sight — I could have sworn that she was a different person.

The confident energetic vibe coming from the girl I spent time with this weekend feels nothing like the shame that poured off her so long ago. She’s bright and glowing. She loves herself deeply. She has her struggles — like we all do. But she is dedicated to her healing and she is clearly on her way.

At one point I caught her standing in the sunshine, taking a selfie for instagram — a far cry from the girl who was uncomfortable in her skin — ashamed to be seen in public.

I wasn’t the only person she worked with during her healing… and really… this isn’t about me at all.

To me, her story is about life, growth and determination.

It’s about human potential and about the possibilities of restoring a broken spirit.

It’s about what people are capable of when they begin to believe in themselves.

It’s about that fact that when you believe in someone, you empower them to believe in themselves.

When you accept someone just the way they are… you create the potential for them to accept and learn to love themselves.

And that is all anyone needs or wants.

P created a safer support system. She reached out for what she needed. She made the calls. She did the work.

Even when it wasn’t easy.

I facilitated and listened and tried my best to be there, but she did it.

And if there was a furthermore, for me it would be that one person’s courage enables another’s. Me having the guts to go after my dreams (whether it has meant leaving a cult, dropping a phd program, or continuing to squash each belief that says I can’t) has enabled others to do the same.

Going after your highest desire (personally & professionally) doesn’t mean you leave others behind; Your bravery can propel others forward too.

Punching your limiting beliefs in the face while upping your game isn’t just for you… it’s for everyone who wishes they could do the same.

Who needs you to go big?

My guess is more people than you can even imagine.

I love you tremendously.

PS: I’m a life-coach. I help people get their shit together and create a life they love… like really really love. I also love to help people create businesses they love. It is the joy of my life. Read more.