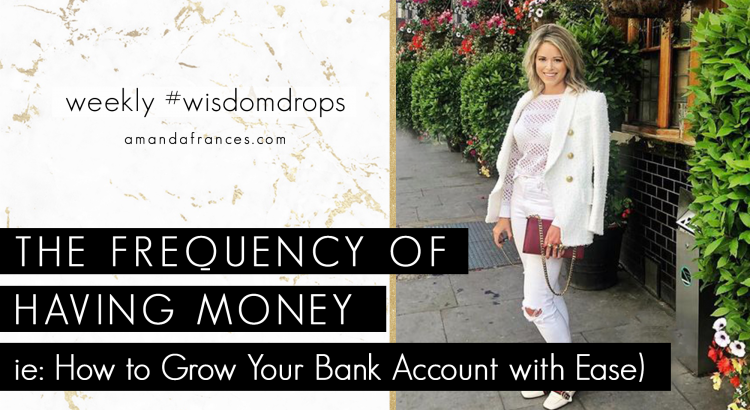 I was recently told by a client:

“Money never seems to be enough, and even if I make more I can’t keep it.”

I talk about this in Drop the Mother Fucking Money Struggle, Money Mentality Makeover, and Elevate into Overflow.

I talk about this a lot.

This is actually one of my favorite things to talk about.

They are their own unique frequencies.

Most money teachers have really only played with the energy of receiving money.

Most people have no conception of the specific vibration of having money.

Having money is feeling the feelings of money in the bank.

More than enough money in the bank.

More money than you could ever know what to do with in the bank.

Feeling that and being comfortable with that.

(This is also separate from the vibration of wealth, which we will have to save that for another vlog.)

When you think about the amount you’d like to have in your various accounts, what comes up?

What limiting beliefs come up?

What ideas come up? What feelings come up?

What comes up that tells you that you can’t have what you desire?

That’s where there is work to do.

It’s the exact same process as becoming an energetic match for receiving money, but it’s about stabilizing the completely distinct vibration of having money as a result of your overflow.

There are three ways people usual sabotage having money (what we usually call “saving”) and perpetuate the feast or famine money cycle:

>> You don’t actually want the money.

>> You fear something bad will happen from having the money

>> You don’t feel worthy of the money…

If any of these three things are going on, you won’t allow yourself to keep it.

Taxes, bills, or unexpected expenses will wipe it out (or taking down to a certain point — this point is your energetic minimum) every time you “save” money.

Here is how I shifted this frequency:

I used to really hate the idea of being responsible.

The idea of savings was not fun to me.

I spent and shopped and traveled and lived my life.

I was making multiple six figures. And everything was fine.

I could receive money with the best of them, but I HAD no money. It came and went quickly with no overflow.

Then I shifted it.

I felt into it. I reorganized it.

It wasn’t about being “responsible” or doing what I was supposed to do with money according to who the effever.

I decided it was hot and cool and fun and badass to have money in the bank.

I felt into that.

I felt into until it lit me up, made me excited, and really wanted it.

That was when I started stacking the paper.

When I started thinking of it different I was able to get my energy behind saving.

I didn’t force it. I didn’t follow made-up societal rules.

I didn’t make myself feel bad for not having money in the bank up until that moment.

I found pleasure in the thought of having a fat bank account. I wanted it. And then it shifted. 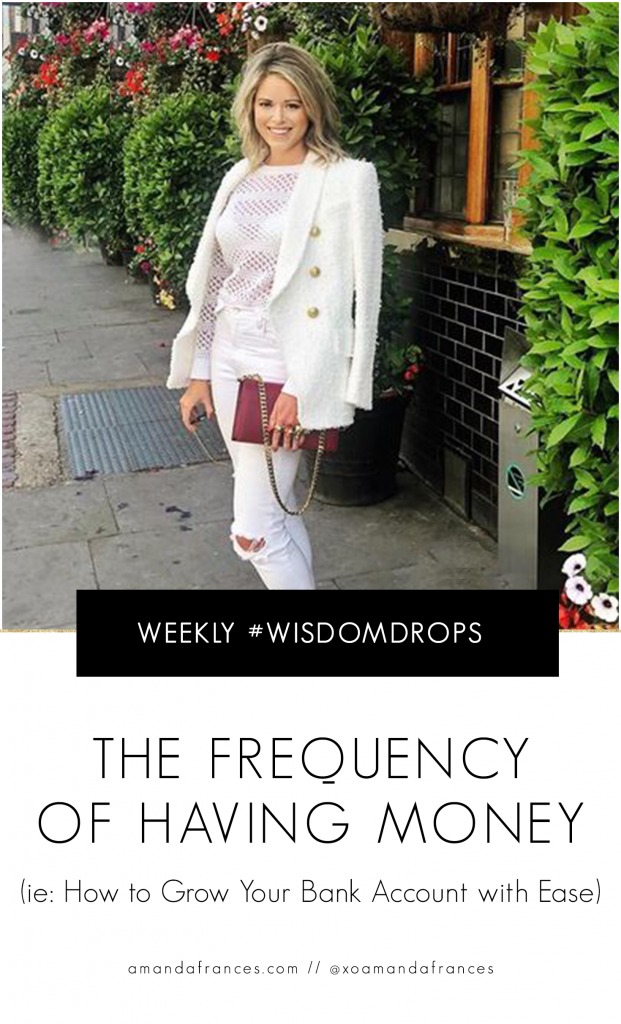 Here is your homework:

>> How much money do you actually want in the bank?

>> How would it feel to have that amount of money in the bank?

>> What tells you this isn’t possible for you (those ideas are the untrue thoughts you get to shift and reframe now.)

Feel the feelings of having the bank account you desire. Now.

Feel the feelings of having it and keeping it. And loving it.

And being safe with it.

It won’t have to deplete itself.

The feast or famine cycle will break when you:

Two years ago I couldn’t save a dollar for anything. I would literally have a six-figure launch to pay my taxes.

A money teacher told me at drinks a few weeks ago that she would never “waste” the money that I spend on my Malibu rent.

She prefers the five roommates in one house, spending as little as possible, and calling it responsible.

You clearly don’t understand the frequency of money, I thought.

That’s not how I see overflow. I receive to the point that I have more than I know what to do with and then I do good things with it including letting it grow in the bank.

I feel so much joy around my Malibu rent, Tulsa montage, five-star resorts, paying my team, watching the paper stack inside of the bank, and making the investments that I’m guided to.

And it all feels effing good. It feels safe for me to have it.

Money trusts me. I flow it. It flows with me.

Rearrange your effed up energy around saving:

Question: Do you guys think I should develop a money mastery course that goes into all of these next level frequencies?

That would be some good stuff, huh?

Let me know in the comments below!

I love you so much.